Whew. About 2 weeks and 86 commits later, I have a branch I’m almost ready to merge to master: a completely redesigned markdown parser using Parsack.

At RacketCon when I gave my short talk about Frog, I had a slide:

When I decided to create Frog, I thought, how hard can it be to write a static blog generator? It turned out, actually not that hard. For the blog generator per se. But I also needed a markdown parser. I wanted one written in Racket, to simplify installation of Frog. None existed. So I had to write one.

It turned out that was hard.

I started by looking at the original Markdown.pl, which uses regular expressions. I took that approach. However, I wanted to parse to xexprs, not to an HTML string. That significantly complicated things. Whereas Markdown.pl can be a series of string? -> string? transformations, I had to handle mixes of elements already parsed to xexprs, and strings. As a result, I ended up writing a somewhat half-arsed thing that was like regexp-match, but could handle xexprs. Sort of. It worked, but with a lot of layers of duct tape.

On the plus side, I accumulated nearly 100 unit tests for various markdown corner cases. I became very good at finding corner cases I’d got wrong. And fixing them, one by one.

But still. I felt embarrassed — this was the Racket code of which I was the least proud. Another slide at RacketCon was this: 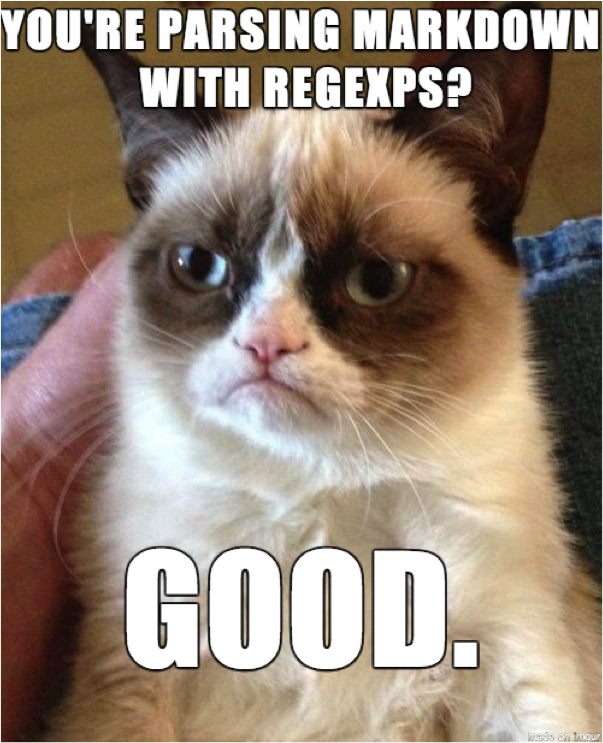 Shortly after RacketCon I went to Japan, and had no time for hardcore coding. But when I got back, I decided to tackle writing a “real” parser.

I wasn’t optimistic I’d succeed. I’d always felt intimidated by this. I never took a “compilers” CS class. When I added CAL, a scripting language, to the Cakewalk sequencer software, I chose an s-expression syntax. Not because of a love for lisp, back then. But because even I could parse s-expressions.

It also seemed clear that markdown isn’t a context-free grammar that’s amenable to a traditional lex/yacc tool. Instead, something like a PEG parser seemed a better bet.

I discovered the PEG grammar for peg-markdown. That encouraged me.

I wanted to use the Racket PEG parser on Planet, but it looked like it hadn’t been updated in a few years, and its docs implied it could be slow.

Then I happened to discover Stephen Chang’s Parsack — a port from Haskell to Racket of much of the Parsec monadic parser combinator. I tried using it, and it seemed to “click” for me and make sense. I experimented with some of the PEG markdown grammar and got reasonable results. But I got completely stuck trying to implement lists (bullet and ordered lists, which can recursively contain other lists). And at times it wasn’t clear how to translate a PEG Frisby-ism to a Parsec-ism. Then Stephen pointed out that Pandoc uses Parsec, so I should check out its markdown grammar. I did.

At that point I had a mishmash of ideas from peg-markdown, from pandoc, and from my own hacking. And plenty of bugs and confusion. But it was working well enough that I felt confident to dig in and slog it out.

In the last few days the pieces have come together quickly. When I’ve found an edge case bug, or need to add a small feature, doing so has been clear and concise. That’s usually a good sign.

The many parser means “zero or more” (like * in regular expressions). There’s also many1 (like +) meaning “one or more”.

The parser-one form in Parsack is a convenience that means, apply each parser in sequence, but I only care about the result of one, which is in a ~> form. In this case, we don’t care about the leading or trailing blank lines, just the blocks between. We return just that.

What is $block? It’s a parser defined using Parsack’s <or> parser, which tries each of the parsers stopping with the first that succeeds.

The <?> parser simply lets you provide more-concise error messages; in this case, “expected a block”.

So that’s the view from orbit: A markdown file is a series of $block elements. One of the simplest is $para (a paragraph), which is one or more $inline elements, a newline, and one or more blank lines:

The try parser wraps another parser with backtracking — if the enclosed parser fails, input is reset to the original point.

Instead of using parser-one, the main parser here is defined using parser-compose, which is the most general form. You can assign parser results to variables like xs, and combine them to return something. This corresponds to the do notation in Haskell; after all, this is a monadic parser combinator.

As does $para, most $block elements consist of $inline elements:

The simplest of these is $str, which is one or more “normal” characters:

Using >>= — the fundamental combinator — is just for brevity here. You could also write it using parser-compose, which will expand to the equivalent using >>=:

Either way, because many1 returns a (listof char?), we convert that to a string?. This is one nuance in Parsack that, if I understand correctly, is moot for Parsec. In Haskell, a list of characters is a string. But in Racket, (listof char?) and string are distinct. As a result, when you write a grammar in Parsack, you might want some of your combinators to chunk (listof char?) up into string for the convenience of “higher level” combinators. You just need to decide and remember where the level boundary is.

This says that HTML <strong> is notated with double asterisks or underlines enclosing one or more $inline elements. So here we start to see the recursion where an $inline consists of one or more other $inlines.

What is enclosed? It’s a helper combinator:

The notFollowedBy combinator, provided by Parsack, does a negative look-ahead. The Frisby PEG equivalent is doesNotMatch. For reasons of elegance and efficiency, it is usually preferable to avoid it — better to say what you want, rather than what you don’t want. But for grammars like markdown, there a few times when it’s incredibly useful to have this. Maybe even necessary.1

The full grammar goes one for about 900 lines of code. Although some of it is tricky to get just right, much of it is fairly straightforward. Although not as concise as the (sort of) equivalent regular expressions, there is such a thing as too much concision (sorry, APL). The Parsack grammar is more readable. More importantly, it’s more maintainable. Your brain’s usual Racket-parsing wetware can see the structure due to grouping cues like parens and indents. So can your text editor. As a result, you’re more likely change it correctly than the equivalent regexp. IMHO.

In conclusion, I should mention that the HTML you’re reading now was created from markdown by Frog using the redesigned parser.

As I type this, I’m using my own build from the topic branch. I haven’t yet merged the branch to master. It’s a big change, so, measure twice, cut once. But I plan to do it soon. Although I’m sure some new bugs will pop up, I have at least one recently-reported bug that the new design already did not exhibit in the first place.